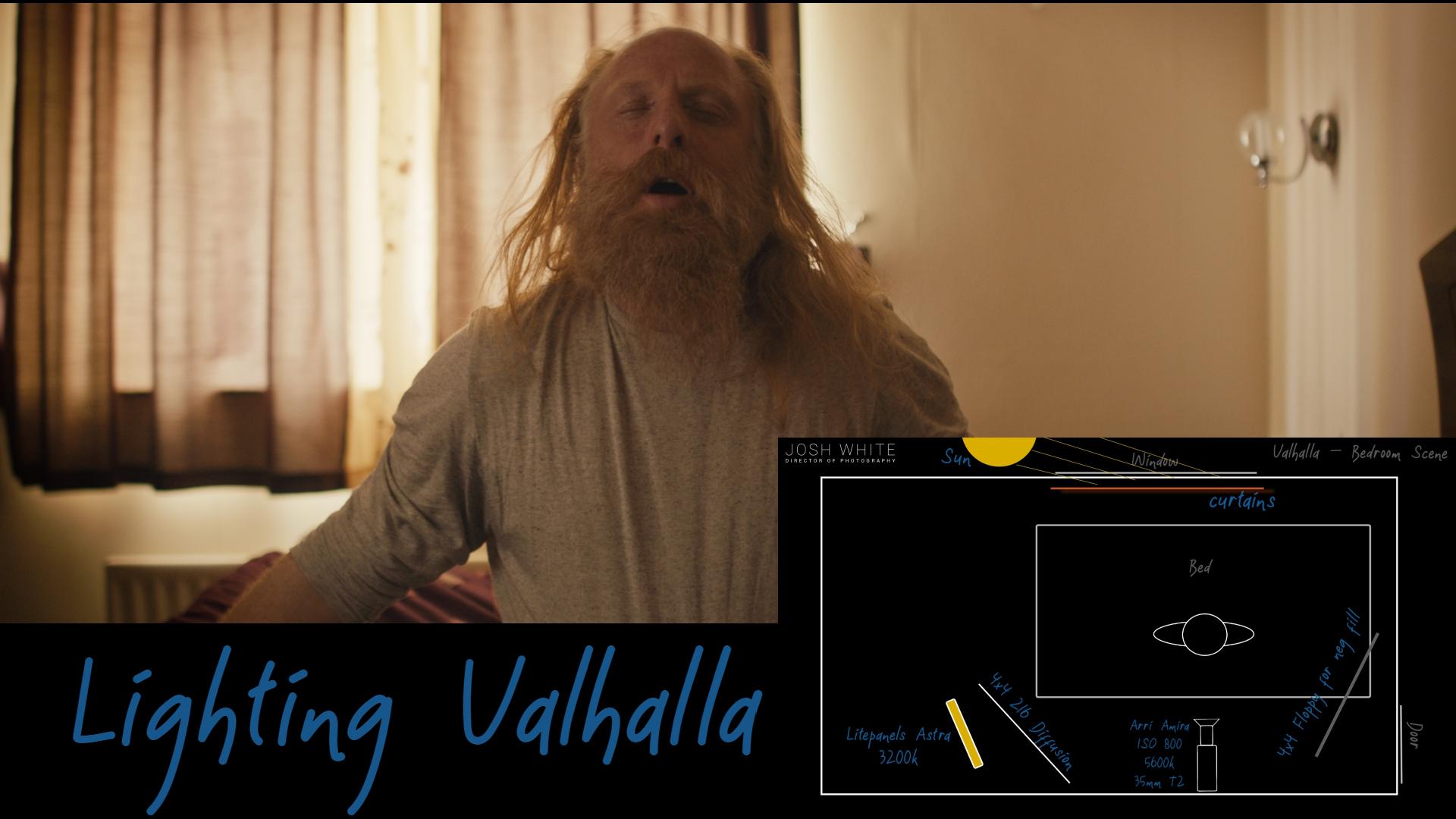 Valhalla is a short film bringing awareness to the plight of men suffering with their mental health… with a Norse twist. Set in both the modern day and the Viking era.

For this post, I have created a breakdown of my lighting approach to 3 of the scenes in the film.

The first scene is set in the viking period, we see our aging warrior hero entering his hut and kneeling by the fire.

Fire was the main motivation for lighting this scene, which I enhanced with a Litepanels Astra with a little CTO, the rotary dimmer knob allows the panel to simulate the effect of fire light dimming and brightening randomly by turning it back and forth. An old school fire effect, but one you have a lot of control over and still works very well.

I also hid a couple of smaller LEDs around to pick out details, such as when he walks passed the bed, this gave a touch of edge light so our hero doesn’t get lost in the darkness of the hut.

There was some daylight creeping in through a hole in the roof above to allow the smoke from the fire to escape. I flagged this off but a hint of it is slightly visible as a cooler blueish top/edge light. In hindsight I might have allowed this to hit the actor a little more, but the subtly does work for the darkness of the scene. Using colour separation can help add more depth to an image.

The second scene immediately follows the opening shot with a transition using an alarm clock in the film. Here we see our warrior hero waking and sitting up in bed at the start of his day.

I really like to utilise natural lighting wherever possible, especially on lower budget productions, as it can speed up a shoot and avoid the “over lit” look, which can easily occur when one gets carried away with too many lights.

For this scene the sun was fairly high and partially hitting the window, luckily the script required the curtains to be closed and the ones at the location were actually perfect – light enough to still let light in and diffuse the sunlight and cream/yellow in colour to give a nice warm feel to represent the character’s safe place, which would contrast nicely with the next scene which represents reality and depression as the character takes his medication.

I exposed for the curtains, letting them start to blow out then closed down half a stop.  This made our actor almost silhouetted; I still wanted to see his face so placed a Litepanels Astra through a pop out lastolite diffuser left of frame and a black flag right of frame to stop any bounce back off the wall and increase negative fill, shaping the face more.
I made no changes between the mid and close-up, although the sun did slightly move behind clouds as you can see with the difference in exposure of the curtain between the two shots.

The bathroom scene was all natural lighting through the window in front of the actor.

The third scene plays out at the end of the film with the hero making his way to the door and is greeted by a Valkyrie character we see earlier on in another Viking scene.

This scene is representing the character’s struggle with his mental health. On this occasion natural light was not working in my favour, for the first shots I covered the main living room windows with black drapes and just left a small gap I could use to shine an Arri 1.2k Fresnel HMI through to give a sliver of light to the wall/sofa and actor, the light was broken up and slightly diffused by a net curtain. The idea was to create a natural vignette around the character and to not directly hit him with the light.

A Litepanels astra bounced into the ceiling gave a small amount of ambient light to lift the shadows and allow him to be seen as he gets up and leaves the room.

The hallway was lit with a Litepanels Astra at the top of the stairs to add ambient light and little edge as our hero walks passed, but mainly lit from the window in the door.